Making homemade cronuts is a labour of love but they are incredibly delicious!

The Cronut is the offspring of an unholy union between a croissant and a doughnut. The brainchild of Dominique Ansel has taken the US (or at least New York) by storm.

Apparently you have to wait in line for one (or maximum two) – I heard rumours of people camping outside the shop at 4am. You can also place on order – 2 weeks in advance. I have to say I was thoroughly intrigued by a pastry that inspires such devotion.

The last time I was in New York was nearly 14 years ago. There’s very little chance of me going there any time soon. So, naturally, I set out to make (my own version of) cronuts at home. 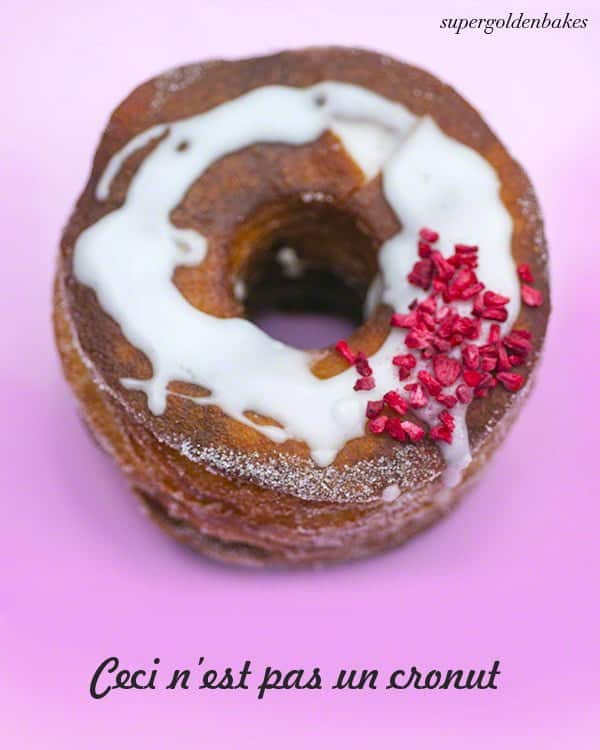 I had no recipe – Monsieur Ansel is understandably rather protective of his creation (it is trademarked) and although some other brave souls have also attempted to recreate this Frankenpastry at home I decided to go my own way. This, by the way, is the equivalent of a 1st year medical student deciding to do solo surgery (with less dire consequences). After all, I have never made croissants or doughnuts before. Heck, I never even deep fried anything before (on rare occasions we have something fried my husband usually cooks). But did I let that deter me? Nooooo!
I knew from description that the Cronut™ needed a flaky pastry dough which would then be fried. This poses a problem as the butter which gives laminated dough the layering would normally melt during the frying process. But I decided to go ahead and try my luck with Danish pastry dough – another recipe I had never tried before.
I made these twice to work out the kinks in my recipe. And the big question …
did it work? Yes. I managed to make something that looks very similar to  the Cronut™. I have no way of knowing however whether the taste is even close to that of the much coveted original. If anyone wants to send a dozen to London for a taste comparison I would really appreciate it!
Did they taste good? Yes – especially when still warm and rolled in sugar. They were crisp on the outside, softer on the inside and oozy with filling. Despite the frying they did not taste oily at all.

Would I make them again? Probably not. Apart from the fact that they are a LOT of work, I would not really want to make a habit of eating deep fried butter (which these essentially are). They also go stale very quickly which is probably why the Ansel bakery only sells a limited amount every day. Having said that, a stale doughssant tasted very nice dipped in my morning coffee…

I tried these filled in coffee pastry cream with salted caramel drizzled on top. Although this sounds delicious, I found the pastry cream too heavy. I think whipped cream or lightened pastry cream work best. You can play with the flavours to use whatever combination you prefer.
For the dough
Makes 6 – make the day before150ml warm milk / 2/3 cup
2 tsp instant dried yeast
60g caster sugar/ 4 tbsp
2 large eggs at room temp
450-475g bread flour / about 3 1/2 cups plus extra for dusting
1/2 tsp salt
250g chilled unsalted butter/ 1 cup or 18 tbsp
1 liter /quart sunflower or vegetable oil for frying
Caster sugar (to roll them in)
For the filling
300ml double cream* ( 1 1/4 cups)
3-8 tbsp icing sugar (or to taste)
seeds from 1 vanilla pod (or use whatever flavouring you like)
* you can use pastry cream but I found this combination too heavy 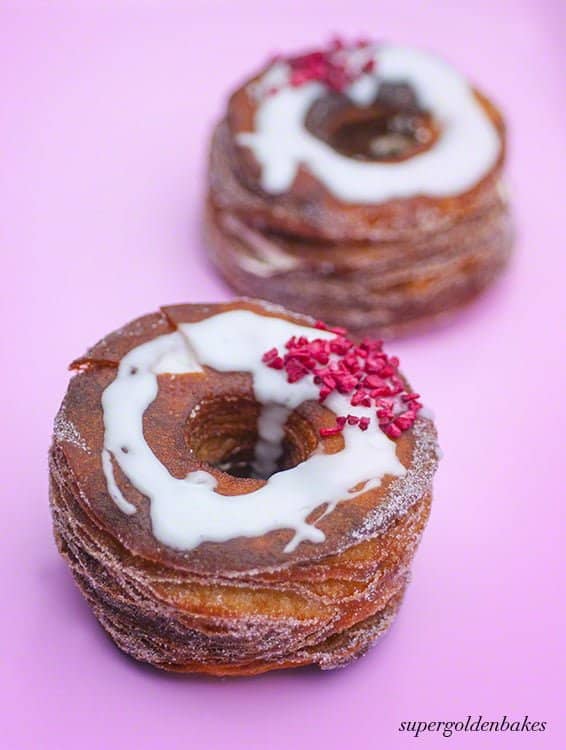