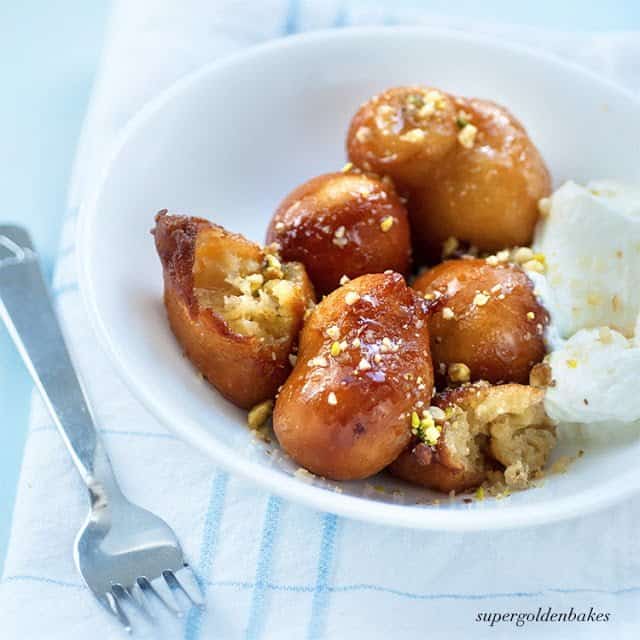 Have you ever eaten Loukoumades? You probably have if you live in Greece or ever vacationed there. These mini doughnut bites are made with a deep-fried yeasted batter and they are incredibly addictive. In Ancient Greece they used to be served as ‘honey tokens’ to the winners of the Olympic Games, but these days they are becoming a little hard to find.

I wanted to try my hand at making them ever since I lost my fear of deep-frying (thanks to the homemade Cronuts). What I didn’t realise is how incredibly easy they are to make. There’s nothing to them! Yes, the dough contains yeast, but there’s NO kneading. It’s a one bowl recipe.

Traditionally these are served soaked in a honey & sugar syrup, but I think it’s much simpler to simply drizzle honey over them while they are still warm. Yum!

This recipe makes enough to feed 4-5 people (even greedy people) – around 30 loukoumades. The frying process takes very little time (once oil reached right temperature) – I served these for (a very decadent) breakfast.

255ml milk | scant one cup
60g butter, cubed |  2 tbsp
80g caster sugar | scant 1/2 cup
pinch salt
1/2 tsp instant dried yeast
300g plain flour | scant  2 1/2 cups
2 medium eggs
1 liter | 1 quart sunflower or vegetable oil for frying
Handful chopped pistachios or walnuts to serve
Honey, Total Greek Yoghurt to serve
Heat the milk and butter either in a pan or microwave until milk is warm and the butter melts. Cool until it’s lukewarm.
Put all the remaining ingredients in a large mixing bowl. Make a well in the centre and pour the milk in. Mix together thoroughly with a wooden spoon. You will have a thickish batter – bit like (American) pancake batter. Leave it to rise at room temperature for an hour (I used mine after 30m and it was fine).
Pour the oil in a large pot and clip on a thermometer. Turn the heat on to medium and watch until the temperature reaches 170C /338F. You want it to stay at that level. Line a plate with some paper towels.
Once the oil reaches the right temperature drop teaspoon sized dollops of the batter in the oil – a few at a time. Don’t overcrowd them as they won’t brown evenly.
The loukoumades will puff up and rise to the top and flip over once the are nicely coloured on one side (or you may need to flip them using chop sticks). Fry for a couple of minutes until golden brown then drain on the kitchen paper.
Serve drizzled with honey and chopped nuts with some lovely Greek yoghurt on the side. As with most fried foods, these taste best when freshly made. 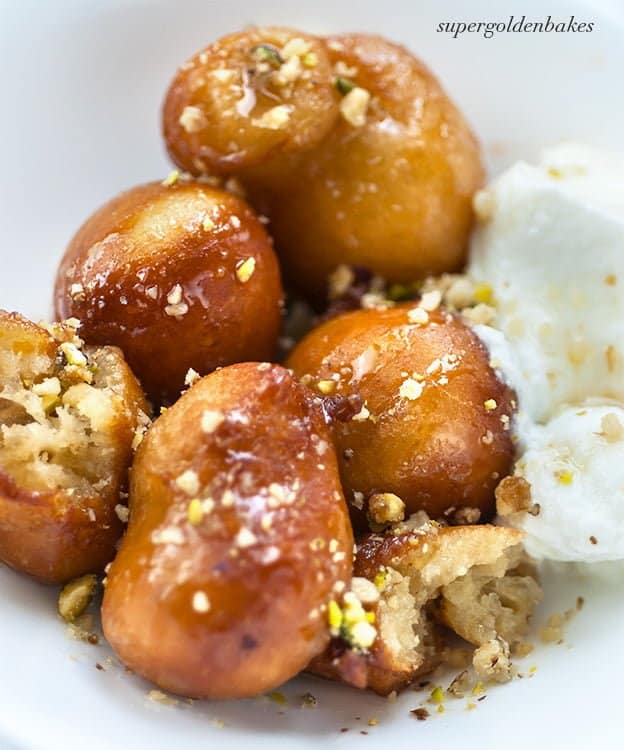 I will submit these to the YeastSpotting Gallery at Wild Yeast Blog.
FOLLOW ME ON SOCIAL MEDIA
« Yoghurt, olive oil ‘Baklava’ cake
White Chili with Skillet Cornbread »