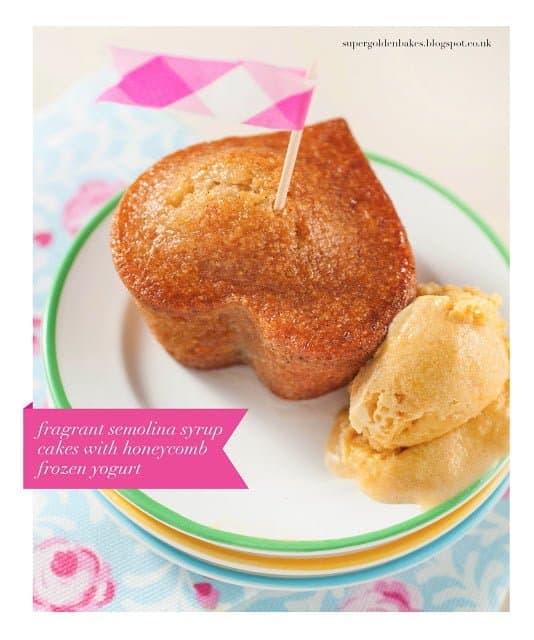 One my fondest memories about growing up in Greece are the open-air cinemas which open at the beginning of the summer and usually run well into September. There’s nothing more romantic than watching a film under the stars in the company of a loved one, the air heavy with the scent of jasmine flowers.

My local cinema in the suburbs of Athens was a typically charming one, with rickety director chairs, gravel underfoot and cats wondering around in front of the screen. Not so typical perhaps was the cake that you could buy at the concession stand. Samali is a semolina based cake, very sweet, dense and fragrant. It was sometimes served with mastic gum (Μαστίχα) ice cream which cut through the syrupy sweetness. 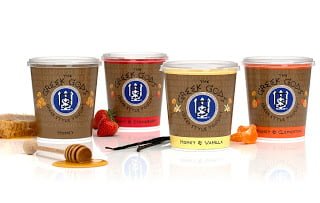 When I saw the Foodies100 challenge to come up with a heavenly recipe using the premium Greek Gods Greek-style yogurt I knew I had just the thing! This recipe may well tickle Aphrodite’s taste buds but I would suggest you share it with a loved one instead.

Line a deep baking dish (at least 20x20cm) with baking paper and spray it with cake release spray. Set aside.

Put a pan or tray with some cool water near your stove. Put all the ingredients apart from bicarbonate of soda in a deep pot and simmer over medium heat until sugar dissolves. Clip on a candy thermometer and raise the heat so that the mixture comes to a boil. When temperature reads 150 C/ 300 F take the pot off the heat and plunge into the tray of water. Immediately stir in the bicarbonate of soda with a whisk – the mixture will bubble volcanically. Carefully pour the candy into your prepared tray and leave to set without touching the tray (otherwise the bubbles may burst). Once completely cool, break into pieces and store in an air-tight container.


Honeycomb Greek Gods frozen yogurt
I used the Honey flavour Greek Gods yogurt. It is very rich, creamy and smooth – my toddler said ‘mmm, ice cream’ when he tasted it, which inspired me to turn it into frozen yogurt. Combined with some honeycomb it makes an absolutely killer frozen yogurt. 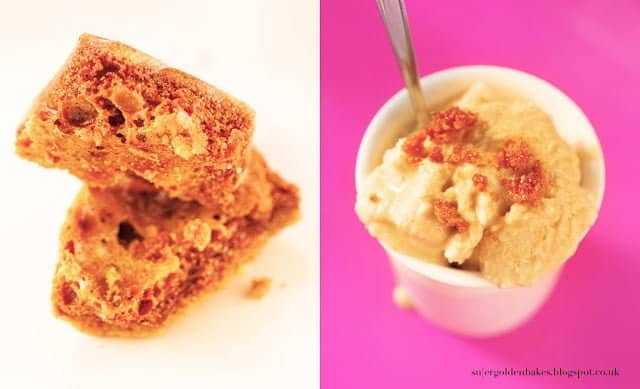 
Stir the honey and vanilla paste into the yogurt and mix well. Pour into a lidded container (metal one preferably) and freeze for 5-6 hours or overnight.

Put several pieces of honeycomb into a food processor and blitz until they resemble breadcrumbs. Put aside. Put the frozen yogurt in the processor (you may need to wait until it softens slightly and then break it up a bit) and process until the yogurt is smooth – this may take several minutes if it is frozen solid. Add the honeycomb and mix well. Pour back into your container and freeze again.


Semolina hearts
These little fragrant hearts were inspired by Samali and Ravani cakes which are popular in Greece and Middle Eastern countries. My recipe is lighter and less dense – it melts in the mouth. The cakes themselves are not overly sweet – all the sweetness comes from the syrup which is poured over the cakes while they are still warm. They are moreish, fragrant and irresistible. Makes about 10-12 mini cakes.

Preheat the oven to 180 C/ 350 F. Separate the eggs and whisk the egg whites using a stand (or hand) mixer until you get soft peaks. Put aside. Whisk the egg yolks, sugar and oil for a few minutes until well combined. Add the orange zest, vanilla and orange flower water and mix well.
Combine the flour, ground almonds, semolina, salt and bicarbonate of soda and then start adding to the batter alternating with the yogurt while mixing on low speed. Add a spoonful of the whisked egg whites and mix to loosen the batter. Carefully fold the remaining meringue with a spoon.
Pour the batter into a silicone muffin tray (I used a heart shaped one) and bake for 20-25m (depending on size). The cakes should be firm and nicely coloured.
While the cakes are baking prepare the syrup. Put all the ingredients into a pot and simmer for 20-25m. Cool slightly and remove the orange peel and vanilla pods. Carefully pour the syrup over the cakes while they are still warm (and still in their silicone tray). The syrup should be absorbed immediately – don’t saturate. Remove from the tray carefully once they are completely cool. These keep very well for a few days – simple store in an cake tin.
Serve with some of the honeycomb frozen yogurt – simply divine!

Note: you can bake in a cake tin to make a cake rather than mini cakes. In Greece Ravani is normally baked in a large baking tray (but for that you must double the recipe). 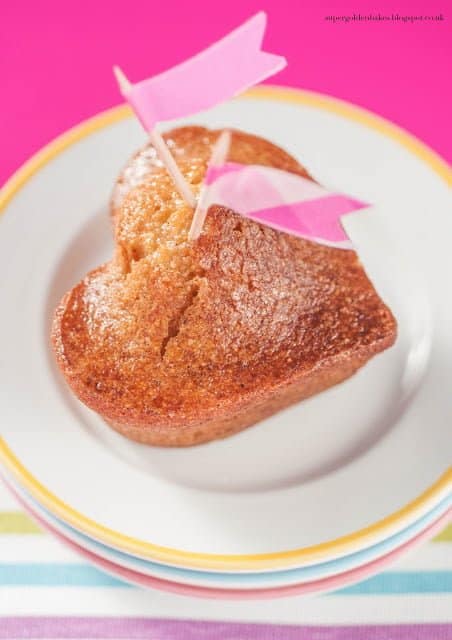