You are here: Home / Recipes / Chocolate and pistachio macarons 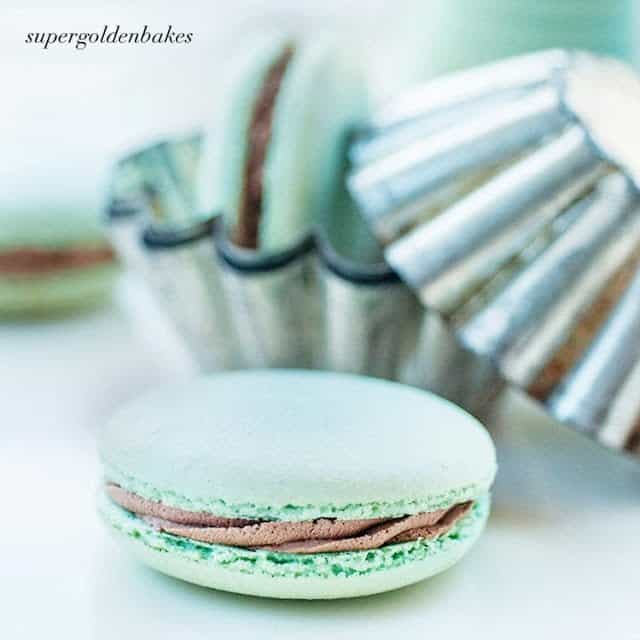 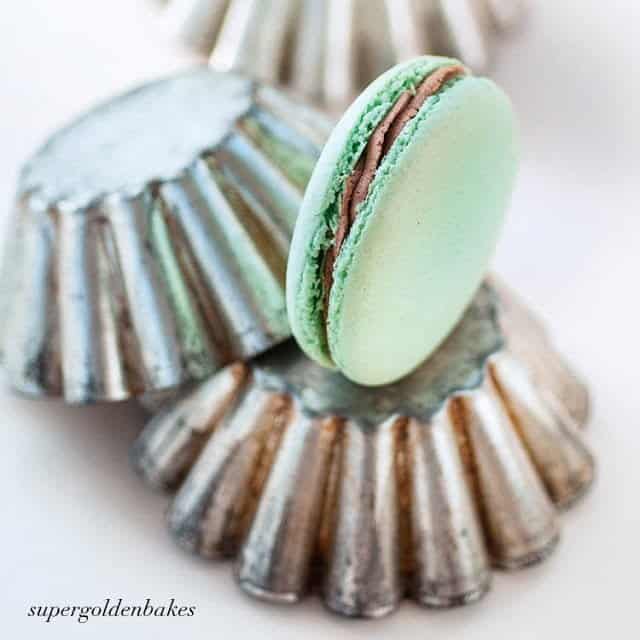 It feels like it’s been ages since I last posted a Macaron recipe but fear not, my macaron love affair is still going strong. I have tried a couple of different recipes and techniques and I always come back to the recipe and method I used on the double raspberry macarons. I added a teaspoon of egg powder because I read somewhere that it gives them a little ‘lift’ but I don’t think I noticed much of a difference so it is completely optional.
I settled on pistachio macarons as I received a packet of goodies to try through Why Nut – a company that supplies the finest pistachios and hazelnuts as well as all natural pastes. That’s right – no artificial colours, preservatives or fragrance – the paste I used in this recipe had captured the very essence of pistachios. It pairs really well with dark chocolate – the filling recipe below is particularly delicious.
I made some normal and some ‘giant’ macarons this time around. The larger ones are tricky to bake – they need quite a long time in the oven. If the edges are colouring then the oven is too hot. Reduce the temperature slightly and bake for longer.

Macarons
200g | 7oz icing sugar
200g | 7oz ground almonds
150g | 5 oz egg whites divided into 2 x  75 g / 2½ oz quantities (equivalent 5 eggs)
200g | 1 cup caster sugar
50 ml | 1/4  cup water
1 tbsp Why Nut pistachio paste
1 tsp egg powder (optional)
Couple of drops green colouring(optional)
Chocolate pistachio filling
3 tbsp plain flour120 ml | 1/2 cup milk115g | 1 stick butter100g | 1/2 cup caster sugar100g | 3.5oz dark chocolate, melted
2-3 tbsp Why Nut pistachio paste
Pinch salt
METHOD
1. Sift the icing sugar and ground almonds together in a bowl. Discard anything that won’t go through the sieve. Add the first portion egg whites, pistachio paste and a drop green colouring and forcefully mix together with a large spoon until combined. Set aside.
2. Put the second portion of egg whites and egg powder in the bowl of a stand mixer.
3. Put the caster sugar and water in a small saucepan. Clip on a candy thermometer. Bring the sugar to the boil. When the sugar temperature reaches 110C / 230F start whisking the egg whites on high speed. Keep a watchful eye on the sugar – once it reaches 117 C / 242F  pour it very carefully down the side of your mixing bowl while still whisking on medium. Try not to hit the whisk as the sugar can scramble the egg whites!
4. Whisk the egg whites for several minutes until you have a stiff, glossy meringue.
5. Add the almond paste to the meringue and mix it together until it’s well combined. The consistency of the batter is very important – it needs to flow smoothly and when dropped back into the bowl should spread slowly. With a bit of practice mixing it just right will become second nature, but if in doubt it is best to under rather than over mix the batter.
6. Line 2 large trays with baking parchment – secure the paper by dotting a bit of batter on each of the tray corners. Put the batter into a piping bag with a 1 cm / ½-inch plain round nozzle. Use a template and pipe small rounds of batter onto the baking parchment. Pipe slightly smaller than the template as the macarons will spread. If you want to make the giant macaron then use a round cookie cutter to trace 7cm/2.8in circles.
7. If the macaron have little ‘peaks’ when you pipe them, use a clean, wet finger to pat them down. Carefully but forcefully knock the trays against the counter to release any air bubbles. Leave the macaron shells for at least half an hour until they are ‘touch’ dry.
8. Preheat the oven to 150C / 300F. Bake the shells for around 14-17 minutes or up to 25 minutes if you are making the large ones. Do a test batch if you can – oven temperatures vary and you need to find the baking time that works for you. The macarons are baked when they have a smooth, dry top and are firm. Leave them to cool down completely before carefully lifting off the baking paper.
FOR THE FILLING
1. Put the flour in a small saucepan and add the milk. Whisk together over medium heat until you have a thick roux. Cool completely.
2. Melt the chocolate and add it to the roux. Mix together until smooth.
3. Cream the butter the sugar using the paddle attachment on a stand mixer for at least 5 minutes till light and fluffy. Add the pistachio paste. Add the cooled roux and beat until the filling is silky smooth and holds firm peaks.
4. Use a pipping bag fitted with a large nozzle and pipe some of the filling on half the shells. Sandwich together. The macaron will taste better once the filling has a chance to soften the shells a bit. 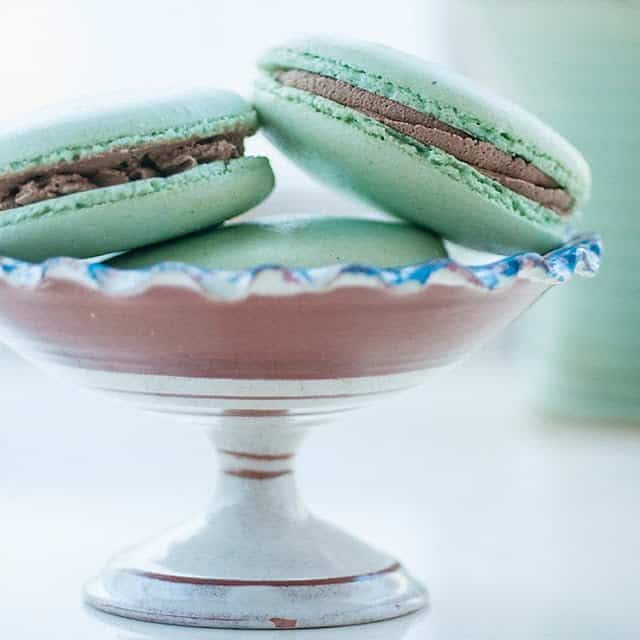 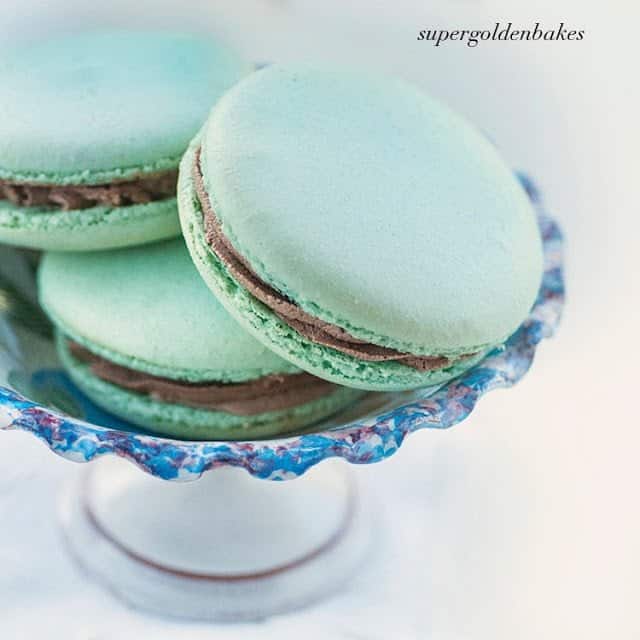